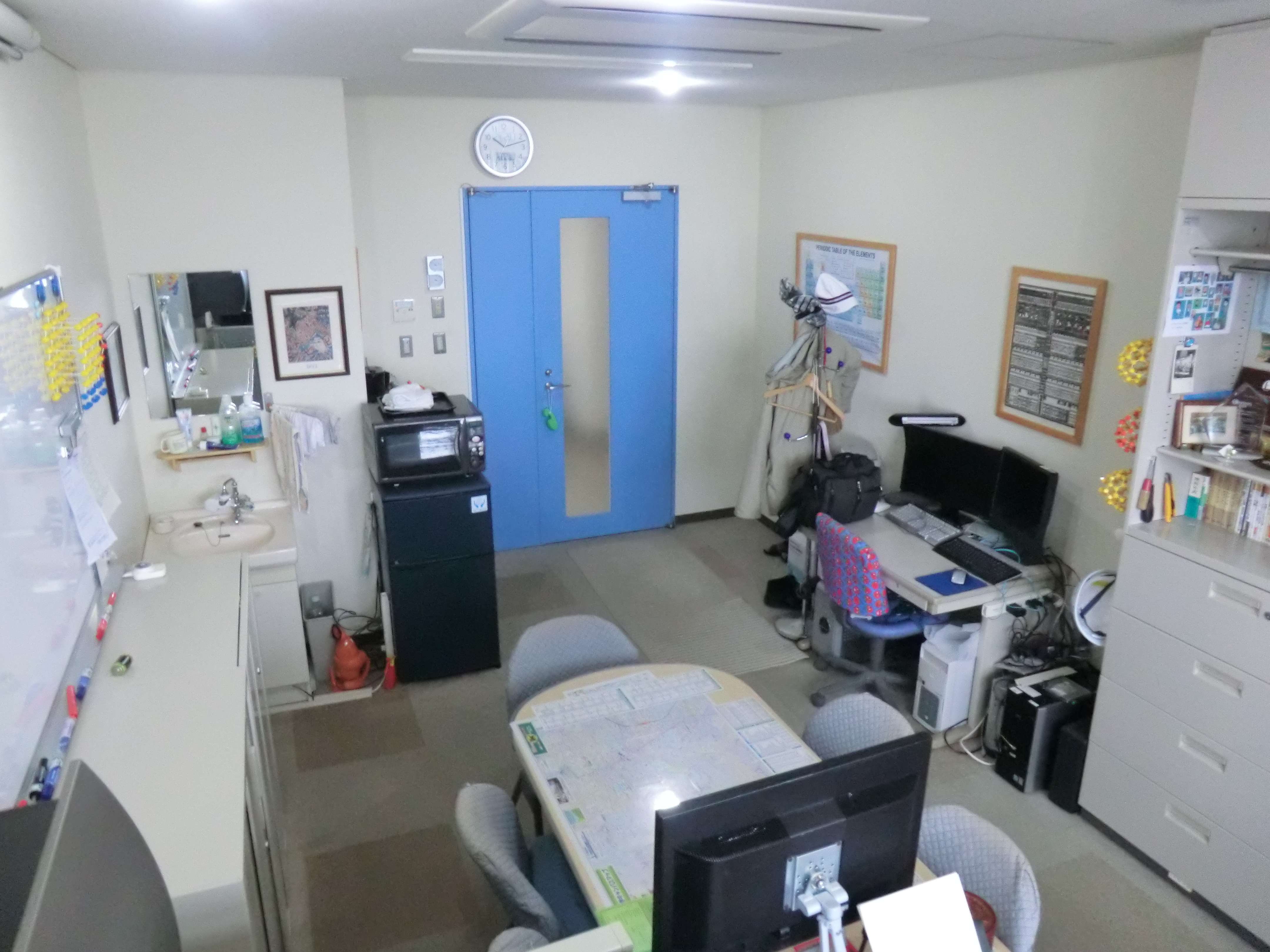 Since last week, people check and mark by color tape the cracks and damaged areas of our building to estimate the cost of fixing. Since we do not have money and since there is no construction company that can fix not-urgent place, our building is still is the same situation as damaged since last year. Probably in the second year, the building will be fixed.

All salary of Japanese national professors (and all national officers) will have 8% discount of salary for two years because of shortage of the budgets. This shortage will affect to the research money from this year, too. We should be patient if we consider more damaged people near our area.

Tremendeous works for recovery are still in front of us for recovering the lost towns and unfunctionalized nuclear plants. Japan is no more a rich country. I hope that there will not be so significant affect for foreign students. Their scholarship is also decreases from 16 man (160,000) yen to 15 man yen per a month from April.

In this winter, we have had a lot of snow in Sendai. I hope that people living at temporary house can survive the winter. We will keep fixing one by one and getting together for encouraging the people that have damaged a lot. We will contribute to the society as a citizen and as a researcher.

In the damaged costal area near the Pacific ocean, people are still living in the public space and waiting for temporal houses. They will finish to move within this year.

Radioactivity is now checked in very controlled way for any food and place. Sendai 80km from the plants does not have any problem. But the places within 20km are considered to be controlled by the government. The government will replace the surface of these area completely for people to live the same place again. The total amount of soil to be removed is considered to be 840,000 m^3.

In Sendai area, there is a large problem to remove the large quantity of broken house etc. Although the place becomes flat but there are many small mountain of the wood and broken house, cars, etc.

There are many students in high schools etc who lost their parent(s). Miyagi prefecture, the NPO, and Tohoku University is making a fund for supporting these students. We expect more than 5 years to solve all the problems in fornt of us.

Sato-san went to Rice University and MIT in this summer. He got many homework there and he is now active for solving many problem.

Saito went to MIT by the support of Prof. Dresselhaus and got many new interesting subjects.

In the damaged costal area near the Pacific ocean, electricity and water do not operate yet since all facilities of wire and water tubes are copletely broken.

Still more than 90,000 people are living in the public place such as city hall, community center, etc. Some people are now moving to temporary houses.

Nuclear radioactivity is strong in Fukushima and there are severe limitation in the life. In Sendai, now the 0.08 micro SV/hour which is now stable. There is no restriction in the life in Sendai.

Sato-san is got an opportunity to go to Rice University by support of Nano Japan (Prof. J. Kono) for one month and half. Saito will go to MIT in the end of August by the support of Prof. Millie Dresselhaus for one week. Sato-san will join to me in MIT for one week, too.

Marcos-sensei and Sara-san in UFMG, Yu Ting-san and Cong-san in Singapole and LiChang-san and Huiming sensei in ShenYang, Profs. Dresselhaus in MIT keep the collaboration for writing scientific papers which encourage us very much. We thank their supports very much. Muito obrigado, Xie xie nimen, Thank you.

All foreign students are now back to their research. Nugraha-san is now attending a conference in Hong Kong. Tareque-san is now finishing his master thesis, Tapsanit san is calculating the near field optics.

We usually are sleepy in April since a warm weather comes in Sendai. However, this year, since we have a lot of continuous earthquake and many works of fixing the rooms, houses, we were not relaxed. Now we feel something tired. We must be careful for our health. I appreciate your collaboration.

In our group, all life is back to normal. The radio active value is 0.08 micro Sv/hour which is higher than before the earthquake 0.05 micro Sv/hour. However, this value is even smaller the averaged value (0.12) of "not-damaged" area in Japan. 0.08 micro Sv/hour corresponds to 0.7 milli Sv/year which is smaller than the averaged natural value 2.4 milli Sv/year for the world. This values are measured every day. All foods are severely checked even though there is no report. Some fishes and vegetables in Fukushima area is restricted. Now restriction becomes more precise.

Tohoku University has got a lot of damage in the building but we can use them as it is. We will fix the crack of wall etc from the higher priority. In cmpt building and floor, since the damage of the wall is very minor (just crack by falling the bookshelf), the fixing should be after summer.

Although the nuclear plants in Fukushima is in stable situation, it is true that they do not even find the way to stop the plants completely. it will take a year to finish this.

The huge area of costal place over 400km is damaged severly but now people are standing and collaborating to construct a new and more safety area. Our campus is 20km far from this area. The boundary to that area is sharp and clear. Sendai city area are back to the normal. The only missing for my life is that we can not use some of swimming pools and thus I must go slightly far swimming pool on Saturday.

Nuclear plants in Fukushima has damaged severely in the level 7. However the radio active value in Sendai is below 0.2 micro S/hour which is normal value before the earthquake. Fukushima area are damaged severely. Sendai city is located 90km north from the nuclear plant.

The coast area which are severely damaged by Tunami are now starting to recover but it will take several years for recover. Still no electricity, house and water in some area.

We will start the semester by delaying one month from May 9th for undergraduate couse and from April 25th for graduate course.

Building of the lab:

CMPT people being outside of Sendai.

Building of the lab: